Try LoginID’s FIDO2 Passwordless Authentication Platform Free or reach out to us for more info at: sales@loginid.io.

FIDO2 is an abbreviation for Fast Identity Online, it is designed to solve the world’s password problem. Today, the primary method for logging into a website or app is to use a password, however passwords are a weakness when it comes to fraud prevention. Besides being a major vulnerability for businesses, passwords are also an inconvenience for customers. More than eighty percent of data breaches (avg loss of $3.9M) can be directly tied to passwords with the price of resetting a password via a help desk averaging about $70. The password problem also negatively impacts conversion rates. Online merchants can expect to see a cart abandonment of about 30% caused by lost passwords.

The FIDO Alliance created the FIDO2 protocols with privacy as a chief concern. The FIDO2 protocols ensure that no PII data can ever be used by a third party to follow a user across multiple services. Any biometric information provided remains securely on the end user’s device, never leaving.

What makes a standard like FIDO2 particularly effective is that we see broad cooperation and adoption across the entire industry from the ground up.

The FIDO2 standard has been adopted by chip makers, like Intel, to device manufacturers, like Apple Android, all the way up to the internet browser level. While few companies have implemented FIDO2 authentication currently, more than 4 Billion FIDO2 capable devices are in active use globally and implementations are growing.

Any Android device with an OS version 7 or higher and any device with Windows 10 already have a built-in FIDO2 compliant solution. FIDO2 is compatible with all of the most popular operating systems and web browsers, meaning end users do not have to download any additional authentication apps or purchase hardware to utilize FIDO2.

How Does FIDO2 Work?

After registering, the credential is then used to login. First, the end user’s application asks to authenticate the user, the server then issues a challenge which is ultimately signed by the authenticator using the public/private key pair created during registration. FIDO2 authentication is often called “assertion.” 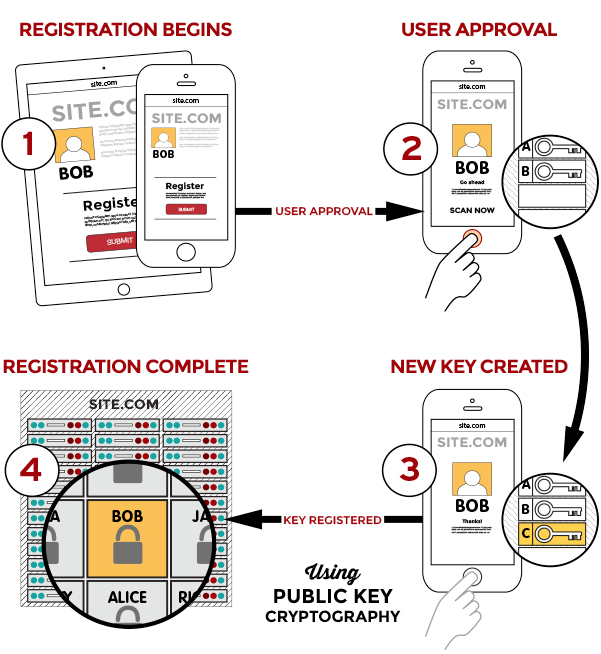 LoginID offers a FIDO2-certified passwordless authentication solution that can be easily integrated, with just a few lines of code, into any website or app. Created with developers and enterprises in mind, LoginID adheres to PSD2 regulations and can enhance your site’s fraud prevention methods with strong customer authentication.

Integrate FIDO2-certified passwordless authentication into your site. Click here for documentation on LoginID’s SDKs and APIs

Get started for Free!

Including many pricing options for different needs.